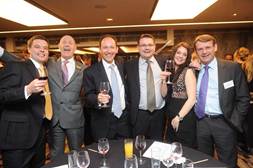 United Trust Bank welcomed over 90 brokers and other guests to a ‘Wine Tasting Challenge’ evening and used the occasion to launch their exclusive broker promotion to win a long weekend in New York.

Following a brief welcome speech by Managing Director Harley Kagan, the guests were split into teams to test their tasting skills on a selection of fine wines from some of the world’s best vineyards. It quickly became clear that some brokers had more experienced palates than others and that although the guests were having a lot of fun the title of ‘top tasters’ would still be a hard fought affair.

Having been challenged to identify the grape, the country of origin, the vineyard, the best food accompaniment and the price of eight different wines, two teams were level on points and the final places were eventually decided by a tie-breaker.

As well as handing out the prize bottles to the winning tables, Executive Director Noel Meredith then announced the launch of United Trust Bank’s exclusive new 2013 promotion giving brokers the opportunity to win a long weekend for two in New York, including an insider tour of Wall Street and a helicopter sight-seeing trip of Manhattan.

Throughout this year brokers will have several opportunities to earn themselves entries to the prize draw. For example, the winners of the wine tasting challenge were all awarded an entry, and brokers who complete UTB’s online surveys will also earn a ticket. There will be more opportunities to win or earn tickets for the draw throughout the year and of course, the more tickets an individual enters, the greater their chances of winning!

“It was a fantastic evening and it was great to see so many of the brokers we’ve worked so closely with over the last year. The wine tasting challenge couldn’t have been closer between the top two teams and although one eventually snatched the title in the tie-breaker, both teams took home some superb wines as prizes.

“I was also delighted that we were able to launch our new broker promotion with the opportunity to win a fabulous trip to New York. It was great to award the first draw entries to the winning team and announce that brokers will have further opportunities to take part throughout the year.”

For further details of the ‘Win a weekend in New York’ promotion please go to www.utbank.co.uk/newyork