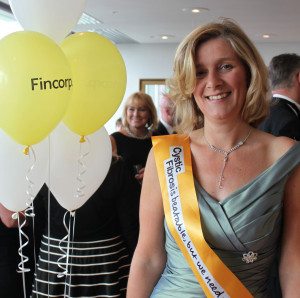 Bridging lender Fincorp has raised a whopping £30,000 for the Cystic Fibrosis Trust through a combination of donations, fundraising events and sponsorship of the charity’s annual ball.

As part of its 25th anniversary year the lender pledged to support the Cystic Fibrosis Trust and has donated a minimum of £100 for every deal completed during 2013. It also sponsored the annual Cystic Fibrosis charity ball contributing to the £12,208.96 raised on the night.

And as we start the New Year, the bridging lender is thrilled to announce it has also raised £9,140 on its JustGiving page so far through donations from brokers, its investors and through direct donations.

“We are proud to be able to contribute something back to society and I’m particularly pleased that we’re able to do something quite significant to support research and help for those suffering from cystic fibrosis.

“It’s a disease that affects over 9,000 people in Britain, my son being one of them. Despite this, it’s not much talked about or recognised – so I’m especially grateful to everyone who contributed via our JustGiving page and through the charity’s annual ball. It’s made a difference.”

Cystic fibrosis (CF) is the UK’s most common life-threatening inherited disease affecting the internal organs. It particularly attacks the lungs and digestive system by clogging them with thick sticky mucus, making it hard to breathe and digest food.

Over 9,000 in the UK have CF and over two million people are carriers of the CF gene. If two carriers have a child, that child has a one in four chance of having cystic fibrosis. Every week, five babies are born with CF and each week, two young lives are lost to the disease.

The Cystic Fibrosis Trust actively supports excellence in research and clinical care, as well as providing practical support and advice to people with CF and their families. They are the only UK-wide charity focusing solely on CF.