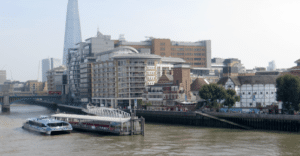 The Carlyle Group has appointed Knight Frank to identify and secure a joint venture funding partner for its 1.4 million square foot (130,000 sqm) mixed-use regeneration project on the South Bank of the Thames.

Carlyle received planning permission for the 5.3 acre, 489-home residential-led mixed use development, known as the Bankside Quarter, in March this year, and has mandated Knight Frank to formalise the process of selecting the best funding partner for the scheme.

It has received unsolicited enquiries from a number of international investors from the Middle East, Asia Pacific and North America.

Situated directly opposite the City of London, Bankside Quarter is located on one of the most sought-after prime, riverside sites in central London and will mark a significant step forward in the ongoing renaissance of the South Bank.

It will comprise nine new buildings of between five and 48 storeys in height and 35,000 sq ft of new public space, including a central square and new gardens.

Carlyle intends to begin the first phase of the development next year, once funding is in place.  This will involve the demolition of the current Ludgate House office building, upon receipt of vacant possession in March 2015, and the subsequent construction of a new 48 storey residential tower comprising 211 apartments, as well as a 17-storey residential tower right on the river’s edge.

Construction of the next phase will commence once Carlyle receives vacant possession of the Sampson House site in June 2018.

Three of the new buildings will be on the western Ludgate House site, with the remaining six constructed on the eastern Sampson House site.

“Bankside Quarter will transform the area of the South Bank around Blackfriars over the coming years, and offers a once in a lifetime opportunity to regenerate a prime, central riverside site of significant scale in London. The development will be delivered in phases over a number of years, replacing the tired and inefficient existing office buildings with a vibrant, thriving mixed-use community and 489 spectacular new homes.  Given its central riverside location, opposite the City, we believe demand for office, residential and retail space in this area will remain, strong, and that Bankside Quarter has the potential to generate substantial value for investors as the project is delivered.”