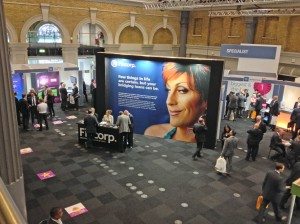 Brokers at this month’s Financial Services Expo in London’s Old Billingsgate have given bridging the thumbs up with expectations that business volumes will rise even further towards the end of the year.

The Financial Services Expo conference saw over 1,100 people attending with hundreds of mortgage brokers and bridging specialists through the doors over the two day event.

Bridging lender Fincorp, which had a stand at the Expo, said brokers were overwhelmingly positive on the short-term finance sector with confidence noticeably improved this year.

Gary Playle, business development manager at Fincorp, said: “We saw a good number of brokers at the show, with everyone finding something positive to say about the bridging market. The overwhelming view was that brokers think the wider property market has turned a corner, with the knock-on effect for bridging that it’s likely to pick up even further towards the end of the year.”

Brokers and bridging lenders agreed that the summer months had seen an unprecedented level of interest in short-term finance with deals also converting with much more regularity.

And across the market there was agreement from various lenders and brokers that after the summer bonanza in the bridging market, while business had slowed down in September, October was already looking busier again.

Playle added: “It was a positive atmosphere and the brokers I spoke to were confident that the momentum we’ve seen gathering since around July is likely to last through to the end of 2013. Much of the increase in confidence was down to better performance in the housing market – prices in London and the South East are rising quickly in some areas and that has definitely boosted demand for finance to get developments done quickly.”

Playle also noted that there was a growing trend among brokers looking to negotiate with lenders on rate.

Headline rates in the short-term market have been gradually falling as competition has risen between lenders. But Fincorp is warning that brokers are being lulled into a false sense of security on behalf of their clients.

Nigel Alexander, director of Fincorp, said: “Headline rates are generally misleading. All lenders have a cost of funds and they make their money one way or another. It’s possible to do this by advertising a lower monthly rate and then slapping high arrangement fees, extension fees and penalty rates onto borrowers to make up the difference – but that, in our opinion, is a less transparent way of charging.”

Fincorp charges a flat monthly rate and no fees.

Playle added: “Brokers we spoke to about the range of rates and fees on offer in the market did seem to agree, once the maths is done, that a flat rate and no fees is easier to understand and often cheaper for borrowers. Doing a bridging deal with a lower headline rate but hidden charges just runs the risk it’ll come back to bite intermediaries when their client gets the bill and a nasty surprise.”